Art of Money Getting 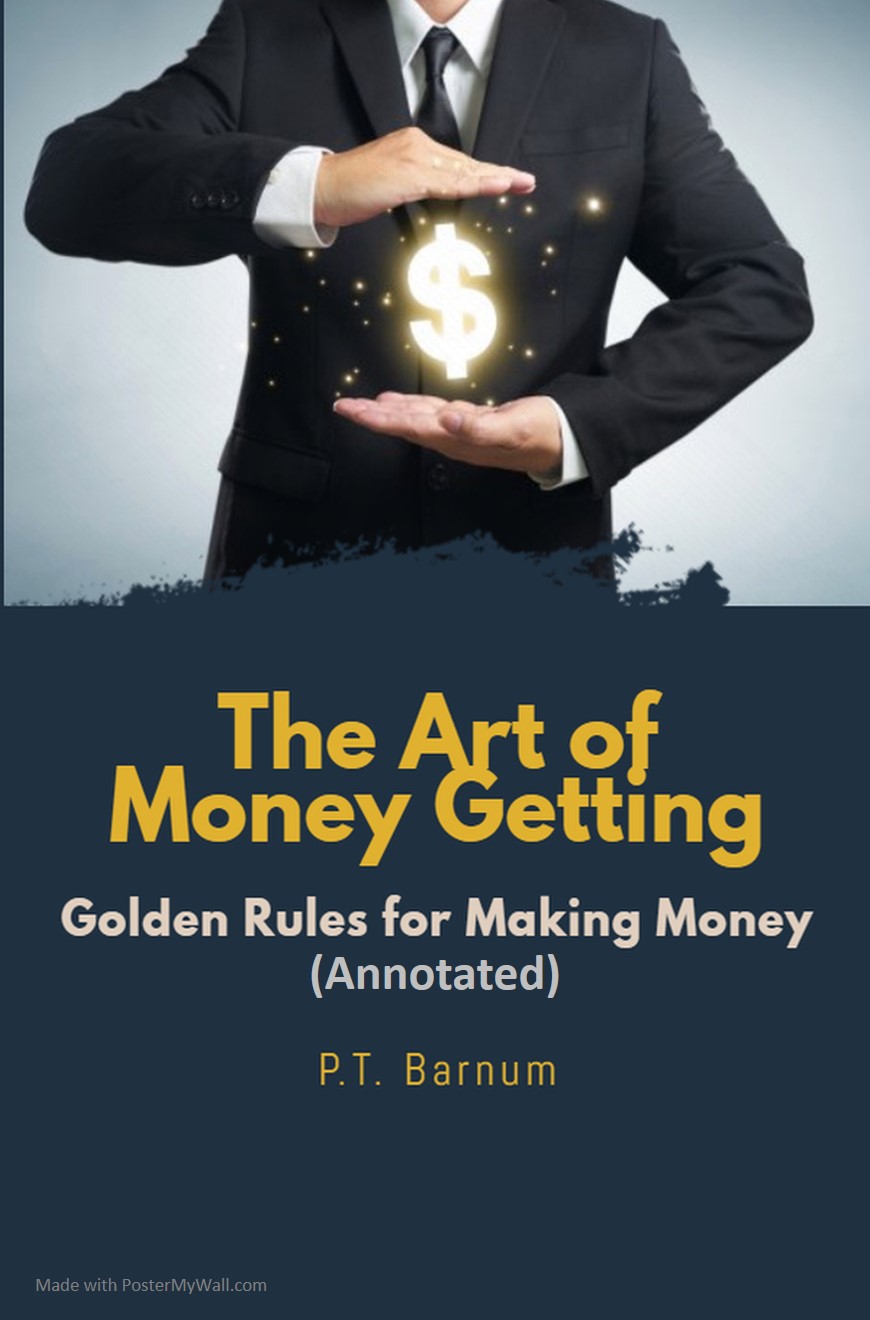 This book ‘The Art of Money Getting’ is a classic book in your hands originally written by P.T.Barnum who experienced lots of ups and downs, struggles and triumphs but led a successful & famous celebrity life that included starting up museum, theatrical houses, musical concerts, serving as Politician and Mayor of Bridgeport, Connecticut and finally starting a Barnum and Bailey Circus company.

He was also a successful writer, publisher and philanthropist in his lifetime.

His life from 1810 to 1891 was full of events and happenings. He has been a legendary figure in the American history and a very interesting one. His personality inspired many other writers and filmmakers to write about him and make many interesting movies.

In this book, he has translated his lifetime wisdom into 20 golden rules for others to remember in order to live a good and successful life. Although many great books have come later to help inspire and improve the personal lives in many ways. But this book makes it easy to remember the 20 rules of living a successful life.

About The Art of Money Getting

The below excerpt is taken from the original book 'The Art of Money Getting or Golden Rules of Making Money' by P.T Barnum (first chapter introduction)

In the United States, where we have more land than people, it is not at all difficult for persons in good health to make money. In this comparatively new field there are so many avenues of success open, so many vocations which are not crowded, that any person of either sex who is willing, at least for the time being, to engage in any respectable occupation that offers, may find lucrative employment.

Those who really desire to attain an independence, have only to set their minds upon it, and adopt the proper means, as they do in regard to any other object which they wish to accomplish, and the thing is easily done. But however easy it may be found to make money, I have no doubt many of my hearers will agree it is the most difficult thing in the world to keep it. The road to wealth is, as Dr. Franklin truly says, "as plain as the road to the mill." It consists simply in expending less than we earn; that seems to be a very simple problem. Mr. Micawber, one of those happy creations of the genial Dickens, puts the case in a strong light when he says that to have an income of twenty pounds per annum, and spend twenty pounds and sixpence, is to be the most miserable of men; whereas, to have an income of only twenty pounds, and spend but nineteen pounds and sixpence is to be the happiest of mortals. Many of my readers may say, "we understand this; this is economy, and we know economy is wealth; we know we can't eat our cake and keep it also." Yet I beg to say that perhaps more cases of failure arise from mistakes on this point than almost any other. The fact is, many people think they understand economy when they really do not.

True economy is misapprehended, and people go through life without properly comprehending what that principle is. One says, "I have an income of so much and here is my neighbor who has the same; yet every year he gets something ahead and I fall short; why is it? I know all about economy." He thinks he does, but he does not. There are many who think that economy consists in saving cheese-parings and candle-ends, in cutting off two pence from the laundress' bill and doing all sorts of little, mean, dirty things. Economy is not meanness. The misfortune is, also, that this class of persons let their economy apply in only one direction. They fancy they are so wonderfully economical in saving a half-penny where they ought to spend two pence that they think they can afford to squander in other directions. A few years ago, before kerosene oil was discovered or thought of, one might stop overnight at almost any farmer's house in the agricultural districts and get a very good supper, but after supper he might attempt to read in the sitting-room, and would find it impossible with the in-efficient light of one candle. The hostess, seeing his dilemma, would say: "It is rather difficult to read here evenings; the proverb says `you must have a ship at sea in order to be able to burn two candles at once;' we never have an extra candle except on extra occasions."

This book 'The Art of Money Getting or Golden Rules of Making Money' can change your life for good. If you read it and absorb it and apply it, then you can experience the power and the reward of living a successful life.

You can read more pages of the book "The Art of Money Getting OR The Golden Rules of Making Money" at Amazon.