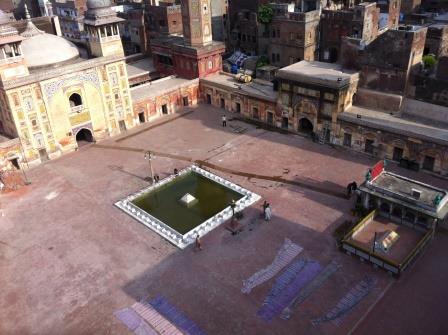 It was a long pending visit to Wazir Khan Mosque.  I was always rooted in Lahore, though I have travelled the world, but I only had hazy flashes of Wazir khan Mosque, as a little child. Recently we as a family made it poin to visit Wazr Khan Mosque on one Sunday afternoon. It was perhaps the first time, I was seeing this mosque inside outside with conscious memory. Indeed it was a great treat to cherish the memory for all the next living years. Let’s unfold little bit of the history of Wazir Khan Mosque.

Wazir Khan Mosque was built by the Governor of the Punjab (1041/1632), Hakim Ali-ud-din (sometimes also referred to as Ilmuddin) in 1634. He belonged to the Punjab town of Chiniot on the banks of the river Chenab, Aliuddin had been employed by shahzada (prince) Khurram (later Emperor Shah Jahan) as a hakim (physician). He rendered great service to the prince during the various campaigns, and became one of the most trusted aides of the emperor—it was Aliuddin, along with Prince Shah Shuja, who was entrusted with the task of bringing the body of the deceased queen Mumtaz Mahal from Burhanpur to Agra to be buried in the Taj Mahal. He was granted the title of Wazir Khan in 1620, he was raised to the mansab (title) of 5000 foot and 3000 horse (panj-hazari) on Shah Jahan's accession to the Mughal throne (1037/1628). It is the same Wazir Khan, who was entrusted with the building of the Khwabgah and Hammam-e-Badshahi in Lahore Fort, just before Shah Jahan embarked on his journey to Kashmir in the summer of 1634 from Lahore—his first visit to the Punjab capital after ascending the throne.

The mosque is located about a furlong from the Delhi gate and off the Kashmiri bazaar. The chowk outside the mosque probably once formed an important part of the plan of the old city of Lahore. The mosque was so located in the centre of the city that all the major routes and bazaars were linked with it at right angles.

The mosque is situated on a raised platform and is reached by a flight of steps to the east. The six steps in this wide passage lead to a platform under the front niche of this gate; another step leads to the centre of a covered octagonal court, the central domed position of this gate. This central roofed area is connected by steps on all four sides: one enters from the east and north through a stepped passage, and from this same centre, opposite the east entrance, one crosses several steps to the west to enter the courtyard of the mosque. 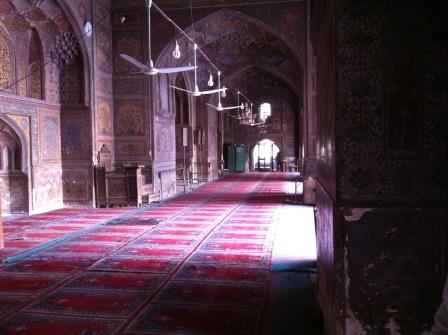 To the north and south of the great octagonal forecourt stretch out galleries with double rows of arcade chambers, each with a sixteen feet wide passage between. This part of the mosque, known as the forecourt, was a novel innovation in the evolution of the mosque plan. The central octagonal court also has double rooms in each of its four corners, probably reserved for the gatekeepers of the mosque. This arrangement is repeated on the upper story of this position. The northern and the southern sides of the main court of the mosque have eleven rooms each, of which those adjacent to the aiwan and minars are double, and probably were reserved for the library attached to the mosque, indicating that apart from serving as a place of worship, this mosque served as a college.

The whole building presents a dazzling view of tile-mosaic and frescoes of extraordinary beauty, which could hardly have been imagined when reaching the Wazir Khan Mosque.

The arrangement of the 5-bay single aisle prayer chamber 130' long, framed by simple is cusped arches carried on deep piers. The central dome, rising higher than others, accents the elegantly detailed mihrab, the ingenious construction of double domes carrying the voice of the imam to the extremity of the courtyard.

The arrangement of kalib kari, a tracery of pendentives, is used in large as well as intricate beehive patterns, giving a special flavour to the building. Its stately octagonal minarets rising to a height of over 100 feet and defining the four extremities of the courtyard, consist of several stages and are capped with a kiosk (chattri) configuration terminated with fluted cupolas, all profusely decorated with the best of Shahjahani tile mosaic. The work was supervised by leading Persian artists who had come to India on the orders of Shah Jahan. One of its most attractive features is the colorful floral and calligraphic designs in glazed tile mosaic work, said to be introduced from Thatta during the 16th century. It is in the decorated panels of this mosque that the cypress as a motif on enameled mosaic work appears for the first time. The improved octagonal minarets, among the earliest of this type in Mughal architecture, are another distinctive feature of the mosque. 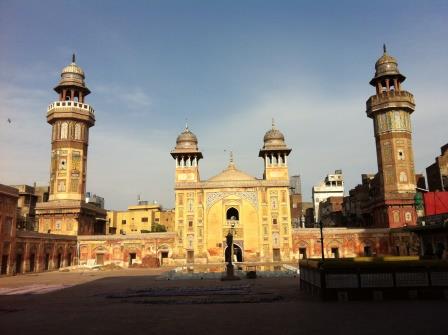 The superb calligraphy by well known khattats (master calligraphers) in rendering verses from the Holy Quran and Persian poetry in elegant nastaliq, naskh and tughra forms is itself a treat. The extraordinary blend of calligraphy, geometrical forms and floral decoration along with large-scale scintillating kashi kari (tile mosaic), fresco painting, stone and chunam (plaster) decoration, with taza kari (brick outline fresco) lends the mosque a character entirely its own. Lockwood Kipling was not far wrong when he declared "This beautiful building is in itself a school of design."

In the basement of the courtyard of the mosque is situated the shrine of the saint Syed Muhammad Ishaq Gazruni, who died in the 14th century.

The trip finally ended and we had our ‘Qeema Wala Nans’ (Beef bread) next to Wazir Khan Mosque. It was different taste but certainly good enough to recall and share it many times.

I took some fresh snapshots of the place (March 2014). I am posting the selected ones here.

Get To Know More About Wazir Khan Mosque 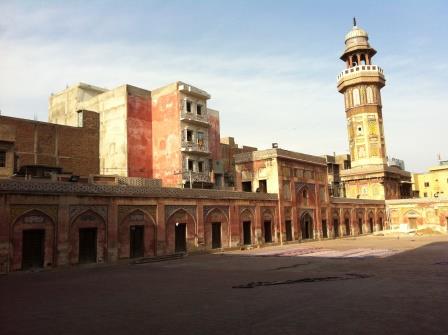 The technical details on Wazir Khan Mosque was consulted from the Walled City Lahore Authority (WCLA). For more information, you may visit their website here.

I am the Founder and Managing Director of IdeasBeat which is a Multimedia Publishing House and Platform.

We create and publish informational, educational and entertainment products.

We also help individuals and small business to come on the web through digital publishing services.